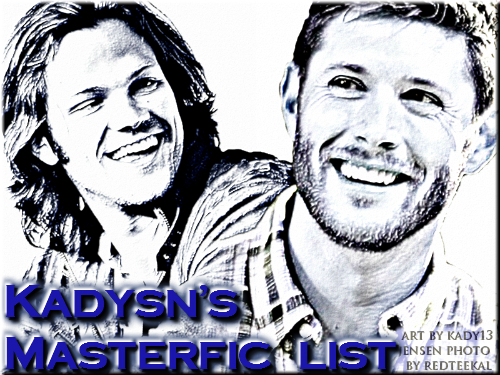 I will update periodically, so please bookmark if you're interested! Thanks!

I know it's been forever since I posted anything here but I wanted to share that for the first time in a few years, I'm taking part in a comm gift exchange. This time, it's for the spn_summergen comm. I'm doing fic and rquesting the same.

In the past I would have supplied photo manip art, but I don't have that option this time.

If you are willing and able, come join me! https://spn_summergen

Posted on my AO3 page... Enjoy, and please leave comments! Kudos are great, but comments are love!

Possibly. If any of you read my fic "Lesson Learned," you may be interested to hear my bestie and co-author

platinumrosel and I are beginning work on the sequel. Just plotting and discussing right now, but at least it's a start. I'll be sure to update if y'all are interested. If you haven't read Lesson Learned yet you can find it here.

I've been away from LJ for a long time due to having a broken computer and no internet. That is fixed now, but I still don't know how often I'll be here. I just wanted to check in and say hi to any of you who are still hanging out here. Drop me a message and let me know how you're doing.

In the past year I went through chemo for ovarian cancer, and I seem to have come through it pretty well, although I still get tired easily. I'm on disability, and have no job.

I haven;t done any artwork or writing either, but I hope to change that soon.

I've missed y'all bunches. Check in with me, yes?

I'm two weeks out from my hysterectomy, so I had a post op appointment with my doc. He told me that the test results show that I have cancer. Not only (was) it uterine but ovarian as well. With my uterus/ovaries/fallopian tubes gone, they still need to do a biopsy to see if it has spread, He said it looks to be in early stage as yet, so I'm hoping I won't have to worry about it much, but still, there's that scary C word, you know?

What worries me also is that I have no job, no insurance, and lots of medical bills (and the expectation of more) staring me in the face. I need to find funds from somewhere. My question is: if I start up a Gofundme page, do you think there would be anyone who could help me out with donations? If not Gofundme, what other things can you recommend I do?

Here's the link to my Gofundme page... https://www.gofundme.com/kathys-cancer-medical-fund ... Any and all help is appreciated. Love you all!

I know I've been away a lot ths year, but my recent excuse is a valid one. I'm a week and a half out from having a hysterectomy, and recovery hasnt been easy. Those of you who have had one know what I mean. I know I'm being impatient, which I have to stop. I have to give it time and get my rest.

Like the reest of you, I'm thrilled to hear that Jared and Gen are expecting again! I have to admit I hope they have a little girl this time, but something tells me Jared is the father of sons. We'll see.

What have I missed, gang?

...since I've posted anything. I lost internet access at home several months ago, so my time here at LJ has been non-existent until now. Still no internet at home, but this week i've been house/dog-sitting for my sister, so I can get online for now and check in with friends.

Great news about SPN's EW cover! What a cover shoot for the guys and Baby, huh? Yowza!

I am so behind on fic...if any of ya'll have anything J2 to rec me, feel free. I've been rereading a lot of my old favorites that I have saved to my Kindle, so I need a fresh supply. :-)

I was THRILLED to read about Jensen and Danneel's announcement of their upcoming TWINS! JJ is gonna be an awesome big sister!

Check in with me, gang. what have I missed, besides all of you? :blows kisses:

...at the ripe old age of 53, that I'm in love and I have a boyfriend. My Daniel is in the Army, but will be retiring in December and coming home to me. God, please let him be my forever love!

EDITED TO ADD: He turned into another spamming jerkwad. I'm giving up on online dating, for a while. I don't need the stress and heartache.
Collapse